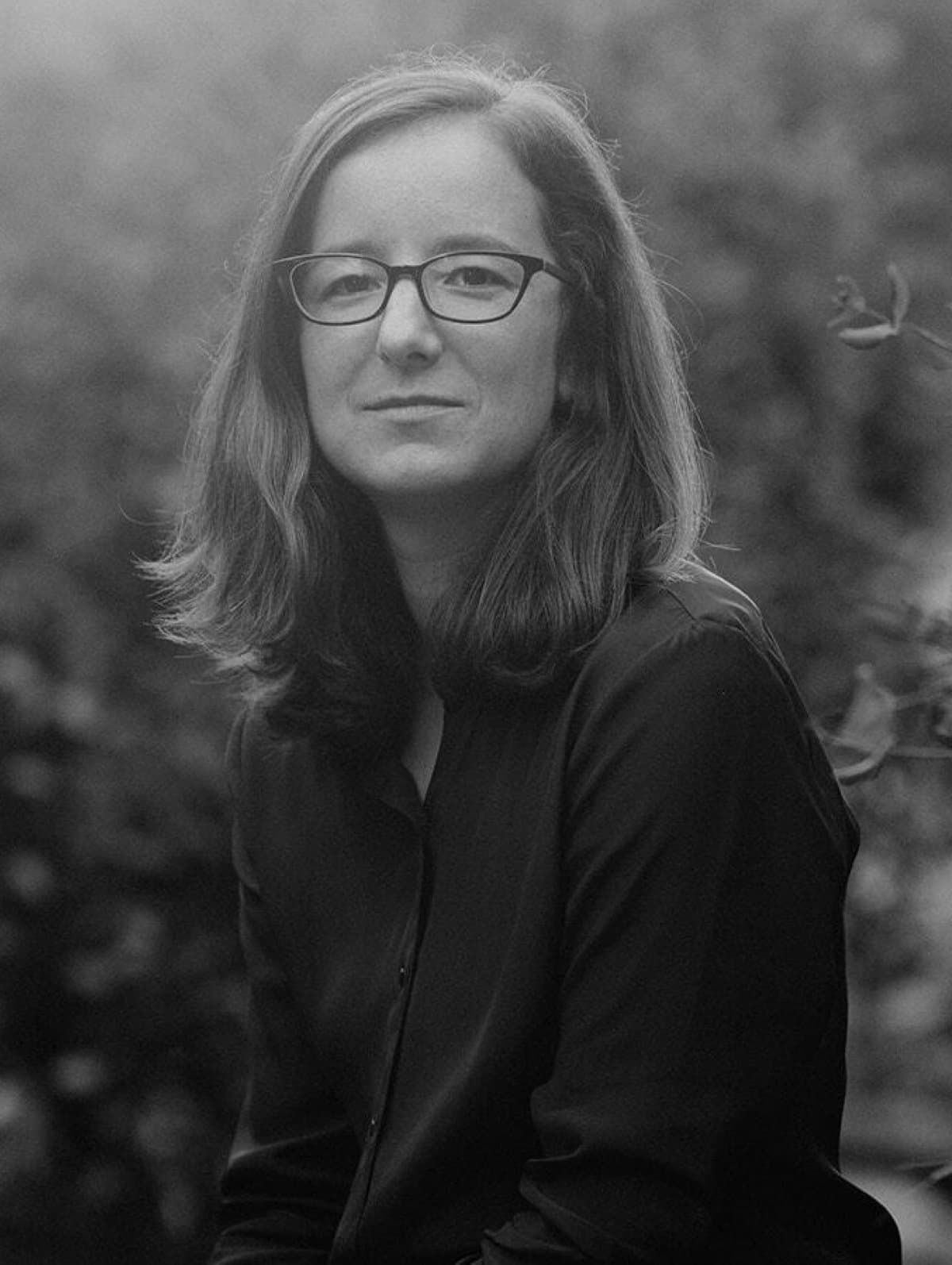 
Getting stuff done with Sophia Li 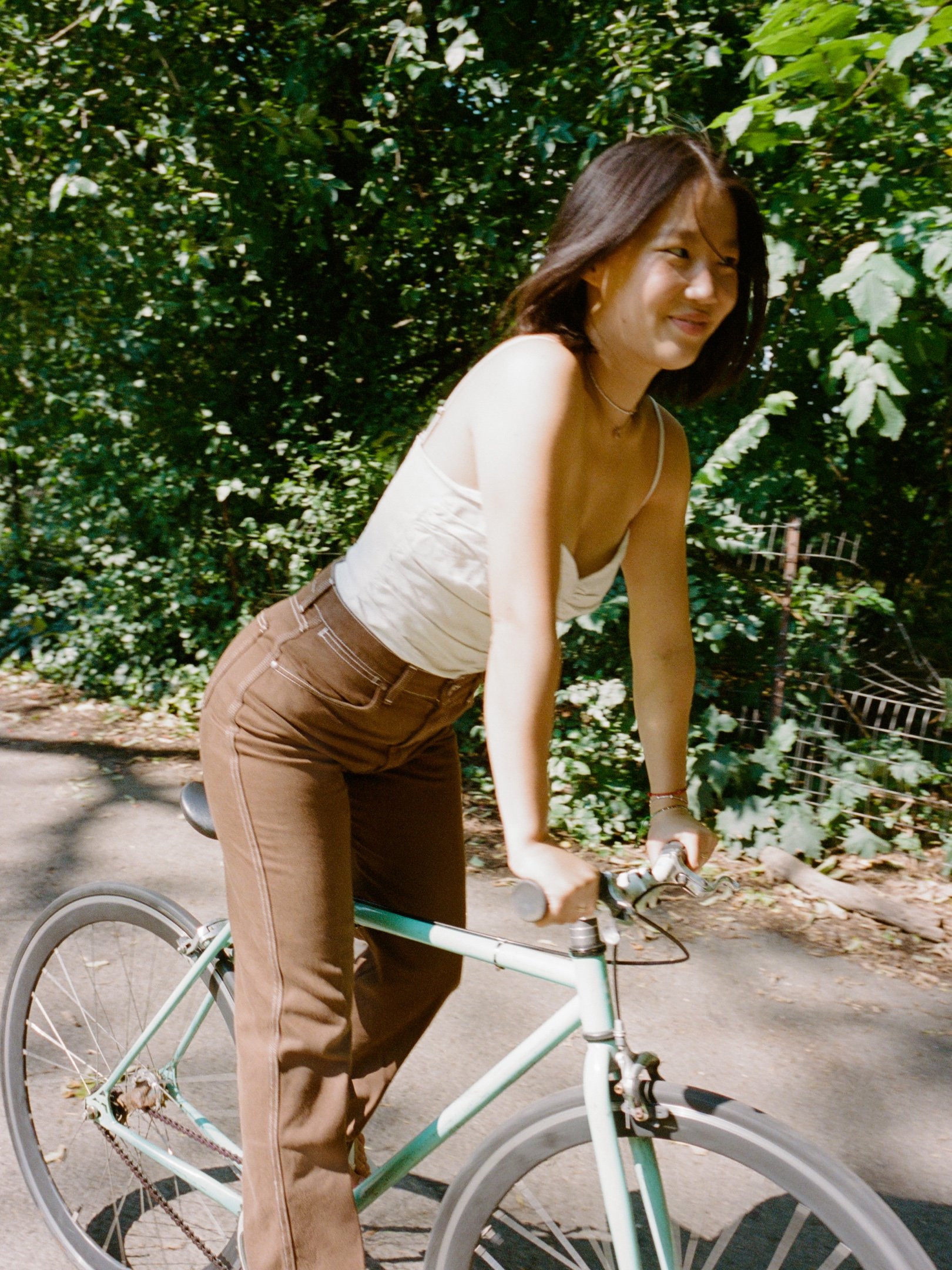 Tell us how you got started working in politics.

One of my first jobs was in organizing. I organized tenants to fight their landlords for better living conditions in Brooklyn, New York, which led me into the labor movement where I worked on a variety of political, organizing, and communications efforts, which eventually led me into politics. I was part of the leadership team at the Ohio Democratic Party in 2010 and have consulted and worked in political, issue, and progressive campaigns at all levels all across the U.S.

What is Fair Fight and what do you do there?

Fair Fight is a national voting rights organization rooted in Georgia that has two arms: a 501(c)(4), Fair Fight Action and a PAC, Fair Fight. We are the nation’s only organization that brings high-impact, politically sophisticated campaign strategies to make elections fair through a multi-pronged approach. I have the privilege of leading Fair Fight Action as its CEO. My job is to lead the organization by driving the strategy, partnerships, and fundraising to accomplish our goals. I always say we have the best team in politics, and I’m so fortunate to lead that incredible team.

What is voter suppression?

Voter suppression are efforts that impact the three aspects of our right to vote.

1. The ability to get and stay registered.

2. The ability to access the ballot, by mail and in person.

3. The ability to have that ballot be counted. There is a web of suppression that has been built through actions and inactions targeted at Black, Latinx, AAPI, young, and poor voters which disproportionately disenfranchised them.

When did you first learn about voter suppression?

I understood it as an abstraction through my career in politics through my twenties and early thirties but ran headlong into it in 2014 when I was running the New Georgia Project. We uncovered that the State of Georgia had quietly implemented an “Exact Match” registration policy that was disproportionately holding up the registrations of voters of color and women. That same year the New Georgia Project was investigated by Brian Kemp, then Secretary of State, and the New Georgia Project was harassed by his office for executing such large voter registration efforts. No wrongdoing was found in that investigation, but the suppressive goals and impact of that investigation were clear. The criminalization of voting and civic engagement activity was in full display then, almost six years ago, and this GOP effort has continued to evolve to suppress and depress voters of color across the country.

What communities does voter suppression affect the most?

Voter suppression doesn’t just affect Black, LatinX, and young voters, they are the focus and premeditated target. All it takes to have your voter registration put on hold in Georgia is for your name to be even one character off from your voter registration to a state database such as your driver's license. That means if you have a “unique” or “unusual” name and an elections worker doesn't type it in perfectly, your registration won't be processed. This is what is known as Exact Match. And who does this effect? Primarily voters of color and women. My registration when I first moved to Georgia was held up because of the hyphen in my last name and it took my concerted advocacy to get fully on the roles; most people aren’t like me, able to consult voting rights attorneys when trying to get their registration processed!

We know that the number one way to suppress voter turnout is long lines. Some of the ways to drive up long lines are precinct closures, precinct changes, lack of training of poll workers, and even conflicting guidance from the state. There are untold numbers of voters who have to leave lines because they effectively serve as a poll tax due to the time and lost wages they require of voters. This is why it’s a system, and it becomes very difficult to tackle.

Where is voter suppression the most prevalent?

Voter Suppression does not only reside in the South. It’s just easier to see with the jarring examples of the 2018 elections in Georgia and Florida. Voter suppression has different faces, but they are all aligned to disenfranchise voters all across America. We’ve seen it show up for students in Wisconsin and New Hampshire, for Latinx voters in Arizona, Native American voters in North Dakota, and for Black voters in North Carolina all in different ways. 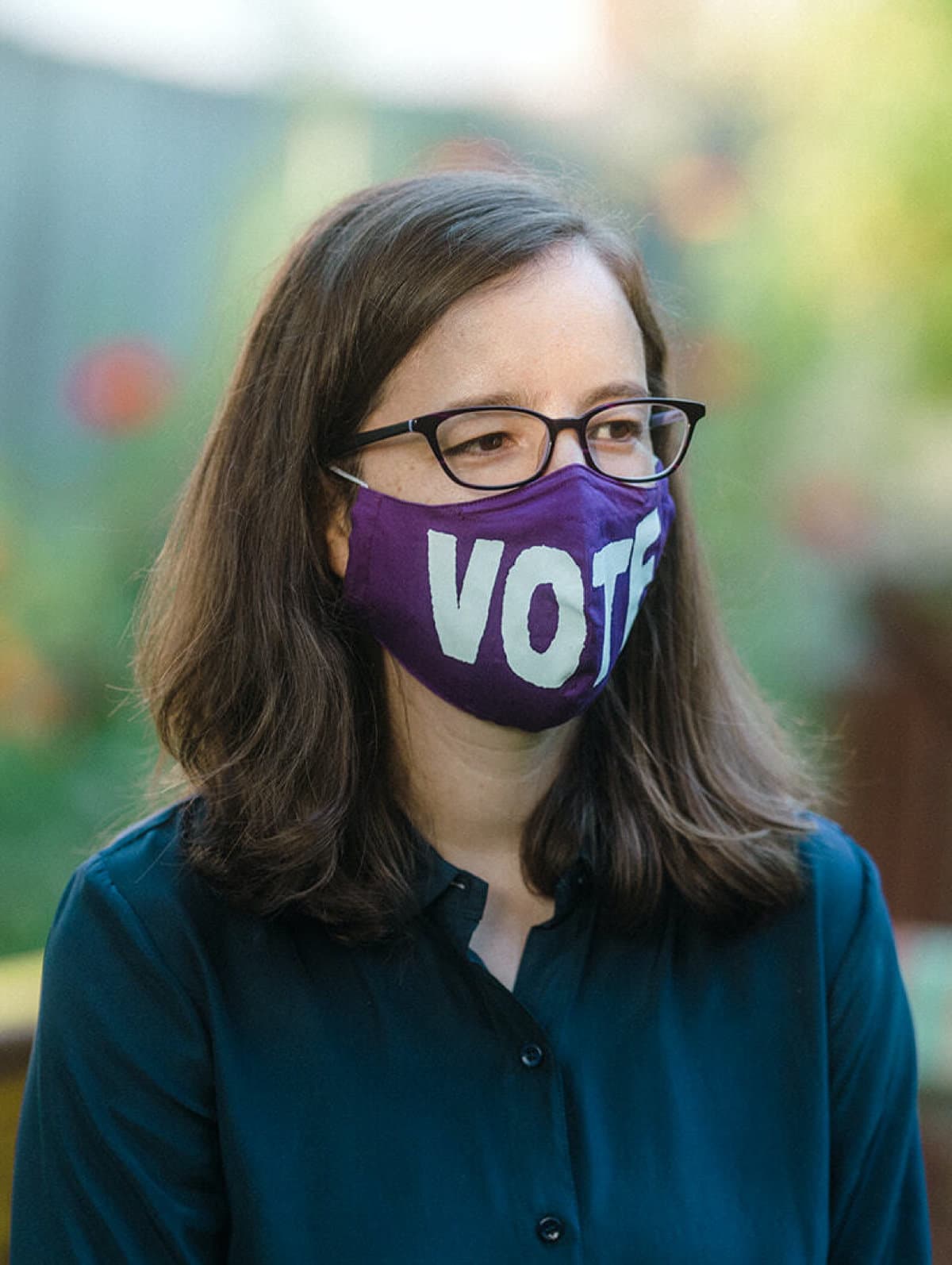 Lauren is wearing the Anne Top in NAVY. 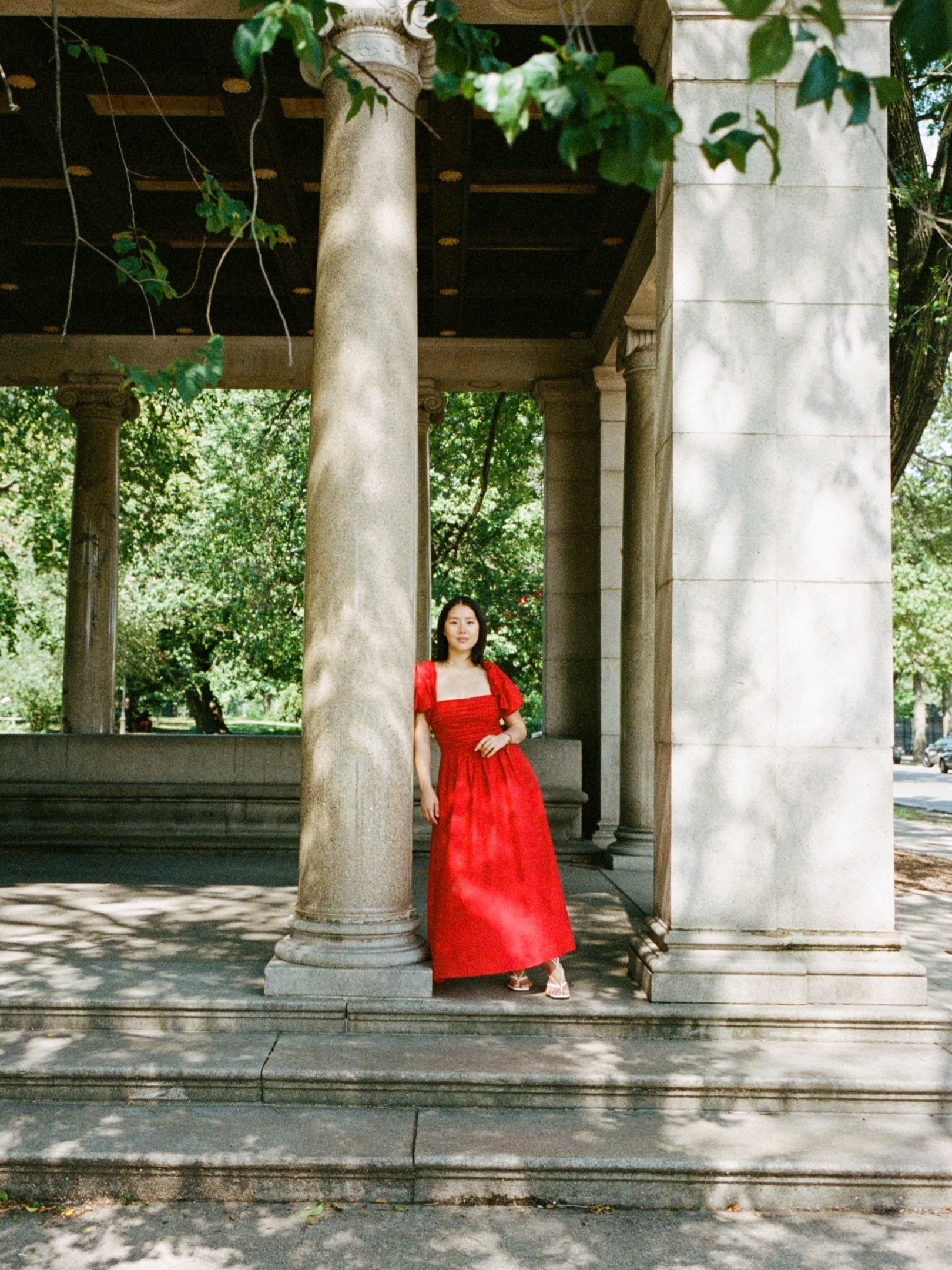 How important is it for people to educate themselves about voter suppression?

Voters hear the president and his party every day and know voter suppression is real and intentional by those in the highest office, even if they don’t label it as such. The most important thing for voters to do is to get good information and educate themselves on how to get and stay registered and to make plans to vote well before Election Day. The good news is there are many great non-partisan sources for good information to register, or check your registration, and to figure out which voting options exist for you in your state on websites like vote.org or you can call national hotlines for more support like 866-OURVOTE (866-687-8683).

What actions can people take to dismantle voter suppression?

First, make sure you and your family check your voter registration, and make a plan to vote. It starts with us. Go to peachvote.com (Georgians) or vote.org (all voters) today to find the information you need to know to make your voice heard. Once you have checked that your registration is active, and have a plan to vote early, vote by mail, or vote in person, the next step is to tell your friends, family, and coworkers to do the same. And then if you have MORE time you can consider these additional ways to partner with Fair Fight and fight voter suppression.

What role do you think social media plays in voter suppression/awareness?

Social media is currently being used to spread disinformation to voters, and it is a key tactic of the voter suppression war machine. Make sure you only uplift trusted sources for voters, and avoid retweeting/resharing any false information, even if it is to debunk. You can follow Fair Fight Action on Instagram, Facebook, and Twitter.

What are the biggest challenges you face in your work?

One of the biggest challenges I have in my role is

1. Helping people simultaneously understand the threat of voter suppression, that it is very real and has impact

2. And practical ways they can fight back.

What advice would you give to people just getting started in the political space? Both professionally and as voters?

Get involved locally and learn how to be an organizer as a volunteer or in a paid position! Organizing fuels change whether we’re organizing our family to get registered and vote, organizing our community to tackle a local challenge, or organizing funds for a specific cause, learning the skill of bringing people together around a cause or to take a specific action is fundamental to making change, as a profession or on your nights and weekends!

How do you stay optimistic and persistent in your work?

My team and the people we serve keep me hopeful. Our core function and goal is not to stop voter suppression before November 2020 but to mitigate it. We can’t all at once undo systems that are so tightly woven into the systems of government in just a few months or years. Our job is to mitigate voter suppression and fight for free elections in November and beyond. Like Stacey likes to say, “When we fight, we win!” We are already winning, and we can’t afford not to be in this fight, and we can’t afford not to have you in this fight with us.